Why Do I Have a Separate Water Meter for My Irrigation System?

Rising water bills have many Houston area home owners frustrated these days but what a lot of those home owners don’t know is that there are a number of ways to significantly reduce that bill and a dedicated irrigation meter usually makes the biggest impact.

Irrigation accounts for between 50% and 70% of all the water we consume in the U.S. and the money you spend on irrigation water in the summer months can be as high as 90% of your water bill in the Houston market. There are a number of steps you can take to reduce the consumption such as having an auditor run through your system, installing a rain sensor, upgrading to an ET based controller (waters based on soil moisture rather than a schedule), converting to more efficient watering devices (rotary nozzles on turf and drip emitters in beds) but adding a secondary irrigation meter may be the fastest way to cut that bloated water bill down to size.

Your water bill is usually divided into two parts; the water consumption and the sewer or waste water fee. Water usage is the part of the bill that most Houston home owners think about when looking at the bottom line. This is how much water you actually used during any given month.

The other half of the water bill is the sewer fee (sometimes called waste water) and this is the fee for the city (water purveyor) processing the water because all of that water goes down the drain and into the city sewer where it must be cared for. This sewer fee tends to be about 50% of your water bill.

What your city or water purveyor may not be  so quick to tell you is that irrigation water, which is the bulk of your water consumption, does not go back into the sewer to get processed, it goes into the soil. Because of this, most cities, to include Houston, allow customers to have a secondary dedicated irrigation meter installed which is not subject to the sewer fee. For many Houston area home owners this could easily mean a $60 to $100 deduction from their water bill during the warmer months.

Here’s how it works:  The city will install a second irrigation meter right beside your existing meter, usually in the same box. It will then be connected to your irrigation system and the city will send you a separate bill each month for that meter. The water that passes through the irrigation meter will not be charged the sewer fee. While it is important to understand that this does not reduce your water consumption, it can drastically reduce the amount of your monthly water bill. It also provides an accurate assessment of how much water your sprinkler system is using on a monthly basis. 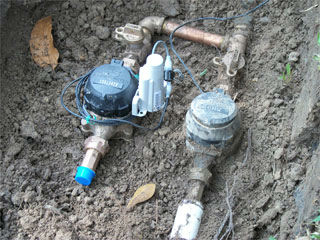 It is also very important that you check with your water purveyor before moving forward with a project like this. Every water purveyor is different and how they credit the waste water or sewer portion of the bill can be very different from purveyor to purveyor.

Some of the outlying areas charge a much smaller fee for waste water which can lead to a much smaller return on your investment. The cost of this second water meter is usually pretty steep. Most of the Houston area can expect to spend between $1,800.00 and $3,000.00 for a meter like this with most of that money going to the city for permits, the meter itself and the city plumber (note that only a city plumber can install such a meter). The ROI for most Houston area home owners, that are in their homes long-term, more than justifies this up-front expense and many homeowners see a return in between one and two years.

When you are calling around for quotes it is very important to know what the contractor you are speaking to is quoting. Most contractors only perform a portion of the work because the entire process requires three licenses to complete (plumber, irrigator and backflow tester/inspector). One company or contractor may be turn-key and the next may leave the application and purchasing the water meter to you. Others may take care of the plumbing portion but leave the irrigation work to you.

We have partnered with COH plumbers to oversee the entire installation and to provide turn-key Houston irrigation services. We fill out all of the necessary paperwork, pull the permits, coordinate the installation and connect the water meter to your irrigation system once it has been installed.

Contact us today to find out how much you can save by having a dedicated irrigation meter installed.

Get a FREE quote